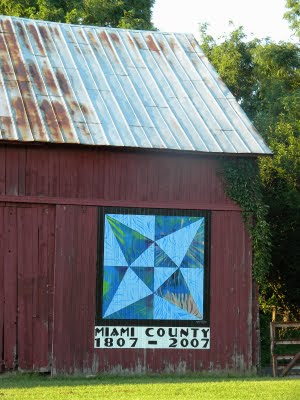 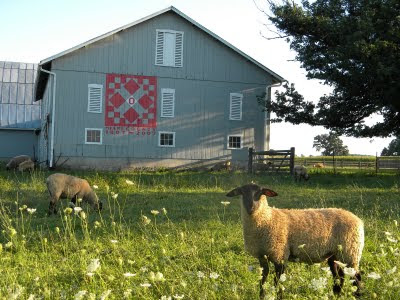 I got a bit worried when the pilot said, "We are beginning our descent into Daytona." But I had seen the Ohio River just moments before, so despite his verbal blunder, I knew that I would be landing in Dayton and heading to Miami County, Ohio.
I had planned to spend Saturday seeing the quilts, but I noticed that if I used the back exit to the airport rather than using the interstate, a couple of barn quilts were on the way to my hotel. Was there any other route to take? Above right is the pride of Ohio--the fella there looks pretty proud of his surroundings! The pattern on the left is "Tippecanoe."

Kay Hamilton of the Travel and Visitors Bureau arranged for my rooms at the bureau's expense--a hotel--that's with an H. Woo hoo!
Kay and I had a terrific time-- except that long walk down a roadside hunting for the camera bag that I had left on the top of the car. Just when we were ready to give up, I looked at the photo I had taken when I stepped out of the car, walked until the view on the horizon matched that on the screen, and there it was!

Judy Rose of El Sombrero restaurant in Troy treated us to lunch. Don't guess I could fill up a bunch of three-ounce containers with their salsa and fly them back to Atlanta in my ziplock bag. I can buy more shampoo, but that salsa! If you ever happen to be anywhere nearby--GO. 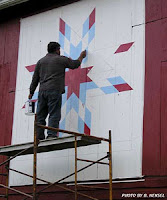 ro is also the spot to meet Rafael Santoyo--the artist who has painted all of the barns here. Unlike most, he stands on a ladder or on scaffolding and paints directly on the building. I hope I got a good interview--I spoke through an interpreter and recorded his responses to be transcribed by my friend Terra, who has generously offered to help with that part of my project AND speaks Spanish. Photo of Rafael is from the MCVB.
Rafael says that he is not an artist because he did not go to school. Check out this detail!! Princess feathers--one of my faves of the day. 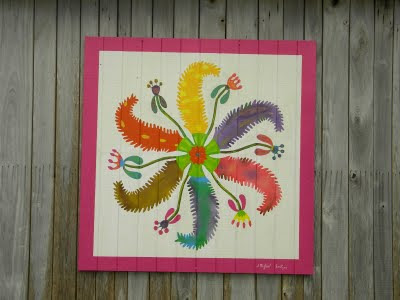 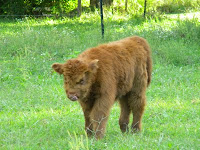 In the non-barn quilt category, we saw a lock that was supposed to have come from a lockbox on a stagecoach and, as always, met some great farm animals. The guy there on the right is a Scottish Highlander calf. Who knew a cow could be cute and cuddly?? Granted, his mama has horns. When she tried to cuddle, things got a bit dicey.