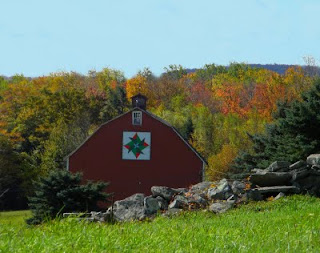 I became fascinated today by the rock walls that crisscross the woods and fields here. Why walls to mark one's boundaries? The best answer I could get from a farmer is that the rocks were there. They had to be moved before fields could be plowed, and they were readily available.

Despite my being an English teacher, I don't tend to think in poems. But the walls are everywhere--some looking as if they were erected just yesterday, and some like the one above, becoming one with the terrain. So there was Mr. Frost in my head again:

Something there is that doesn't love a wall,
That sends the frozen-ground-swell under it,
And spills the upper boulders in the sun.

Yeah, I get thoughtful at the end of a long day.

I have to say I was a bit disappointed, though, as the camera--my camera at least--doesn't see the fall colors as vividly as my eyes do. Ah, well. You will have to visit for yourself.

And if you are still trying to figure out why it's called Neversink--good luck. No one seems to know! But it's a beautiful place with an interesting history, which is going to be fun to write about.
Posted by Suzi Parron at 7:38 PM