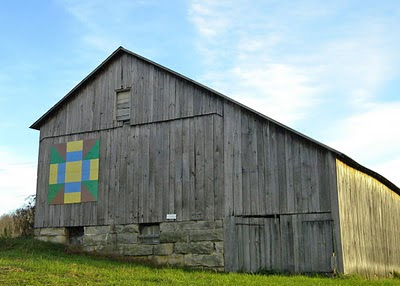 In my last post, I said that I had seen the block "Farm Friendliness" only one other time on the quilt trail, so I thought it would be interesting to compare the two. This one is on the Rannels farm in Vinton County, Ohio.

Bob Rannels was indeed a friendly farmer, who spent over an hour explaining how his barn had been constructed and subsequently raised--something I had learned was fairly common. The other interesting this about this barn is that the roof is made of slate tiles, just like the ones that were used on churches and other public buildings in the eighteenth century.

Bob had some extra tiles nearby, and he gave me one to take with me as a souvenir. I just realized that this post has something else in common with the last one as well. That slate piece caused havoc at the security gate at the Cincinnati airport!
Posted by Suzi Parron at 11:23 AM