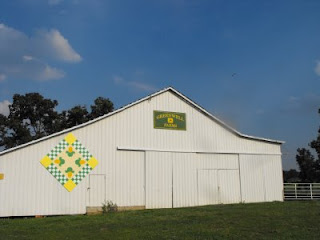 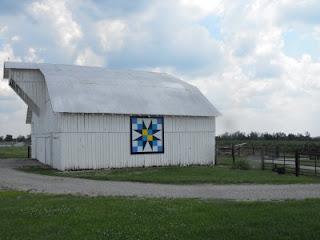 When I emailed the extension agent in Grayson County, KY, I told her, " I would like to come to the area and meet with some of the barn owners for a couple of hours." The wonderful women of the committee there were told that I wanted to meet with each barn owner for an hour or two. So they scheduled one interview for 11, one for 12:30, then lunch, and so on. Oops.

What I SHOULD have said was, "I would like to come to the area for an hour or two and meet with some of the barn owners." Shame on me. If one of my students had written it, I would have caught it! But the ladies were gracious and put a quick tour together.

Cathy, who was nice enough to allow Gracie the pup to ride with us, told me about an organization called warmshowers.org. It's a site where those who bike cross country can find hosts with whom they can spend a night. What a great concept; I think we should have one for quilt barn hunters!

Over in Breckinridge, I heard the extension agent ask the chamber of commerce rep, "Do you think she should go see that tall lady?" I thought that was odd until I learned that the woman's name was Taul. Saw a great signature quilt--not uncommon in cloth quilts but the first I had seen on a barn.

Finally, Jennifer in Meade County proved to be the perfect hostess to end the day on a mellow note. She even remained composed when Gracie chased a turkey. I ran after her--gotta save my baby who almost ate a fellow canine yesterday. I had pet chickens and saw many a stranger get spurred; I can only imagine the damage a turkey could do!

That was kinda funny, but when I rushed Gracie into the car to escape impalement, she jumped into the front instead of the back. I had left the camera lying there, and--SCRATCH. I got on the phone to my friend Jeff; he looked online and found that toothpaste or cigarette ashes are sometimes used to polish out scratches. I don't smoke, and I guess I use the wrong kind of toothpaste. So this morning I was at Best Buy before they opened.