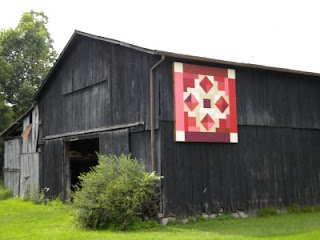 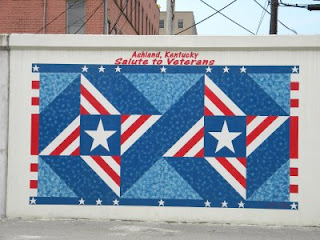 Yesterday, I toured Ashland with Nancy Osborne, who has been involved in the KY projects from the first. We went through the downtown area to see the blocks there and to the floodwall where two very important squares are painted. For those--like me--who don't live near a major river--a floodwall is a long retaining wall between the river and the city. The wall provided the perfect surfact for quilt squares in a community with few barns. The Salute to the Veterans is pictured above.
We also stopped off at the local museum, where the many country music legends native to the area are honored. One of the important early figures in folk music is shown below; I hadn't heard about anyboy traipsin' in a long while! She is an Ashland native, born Jeanette Mary Francis de Assisi Aloysius Narcissus Garfield Bell, but known as Jean Thomas. Google her--great story!

I wish I could have stayed for lunch with Nancy, but nope--off to Carter County, where rainy weather hindered my barn watching a bit.
In between showers, I saw my first mule quilt block and coaxed the eightyish woman who navigated ever so slowly with the aid of a walker to shuffle up the grass hill to pose in front of the barn with her quilt. It's a true Kodak moment photo, so I feel only slightly guilty. Wait till you see it!

On to Morehead. As we were checking into the motel, Gracie almost pulled off of her leash trying to chase something. Normally she is pretty good at stopping when I tell her to. OK those of you who know her can stop laughing now. At any rate, I have now seen a skunk up close, and guess what--it ran away!! Whew!
Today--AHHH . We didn't have to pack up and move. And we toured only one county--Rowan.
Betty and Gladys are the true champs of barn quilt touring. They rode in the car with me and Gracie. That meant Betty sitting in front of Gracie (lots of smooches on the neck and barks in the ear) and Gladys next to the pup, being slobbered on and continually thwacked with a tail that has been known to clear a coffee table in one swoop. The kindness of barn quilters still amazes me!
Some great barns here--Kentucky is starting to rival Iowa! The one above is called "Dilithium Crystals." Yes, that is an actual pattern, and no, I didn't know what the heck it meant. But I do now.
Traipsin' on . . .
Posted by Suzi Parron at 9:57 PM