I had such a wonderful time in Ontario!  Our host, Denise Corneil, had done such an incredible job of putting together an itinerary that really gave a great sampling of what they have accomplished.  Her partner int he project, Mary Simpson, joined us for the second day and helped facilitate.

Love this--there is a barn quilt on the other end of the barn, of course. The owner is fairly recent; he had thought about getting rid of the smiley but was told that it was a local landmark! 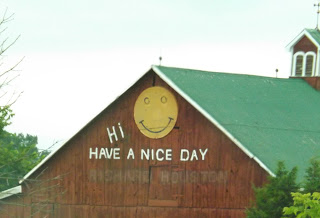 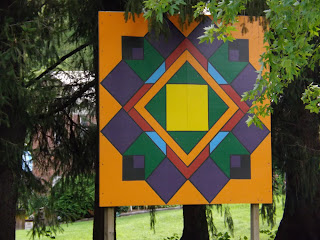 Church window--what a beauty!  On "stilts" as they call it here! 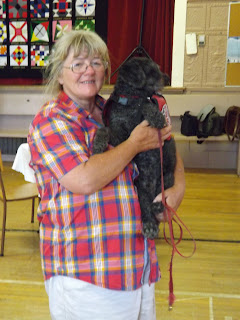 Christina and her dog, Charlie, traveled every quilt trail in the area by scooter, and she has photographs of every barn quilt--in order!  What in incredible journey. 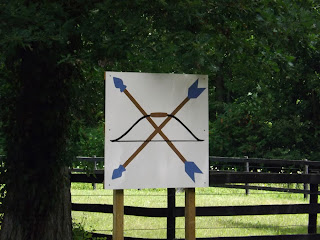 One of the trails is dedicated to the First Nations--what we might call Native Americans. Here, Bow and Arrow represents an important tool used for many generations. 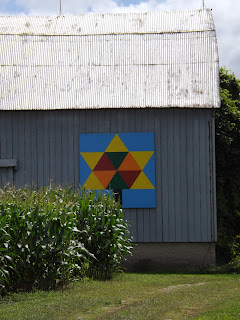 We are in new York and headed to Le Roy to see their trail.  Can't wait!
Posted by Suzi Parron at 9:37 AM 2 comments:

It had to happen eventually, so I went for sooner rather than later.  Yep--that's me driving Ruby!!  It actually was not as bad as I expected.  Three hours total, including the drive through Indianapolis.

We had a grand time in West Lafayette and the next night at the state fair. 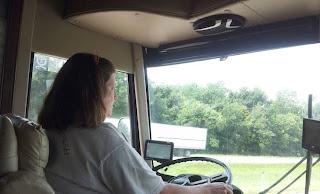 Moving day--I headed up to Chicago to pick up some books, and then we hit the road for Michigan.  Not a few minutes later, Glen reported that the coach was losing power, and we smelled something burning. This was the scene on the side of the highway a while later--electrical fire!

The damage was minor, but it did involve having Ruby towed 100 miles away and our sleeping in a rather iffy motel--the only one I could find at midnight that allowed dogs.

We had to spend another night in Indiana. and the next day, PLAN B commenced.  Everything is now packed into the car--and I mean PACKED.

Off to Vicksburg, MI, where Kitch and Hugh Rinehart greeted us warmly and our troubles were soon forgotten. Here is God's Eye--one of those quilt blocks that I was not aware of at all until I began following the quilt trail. 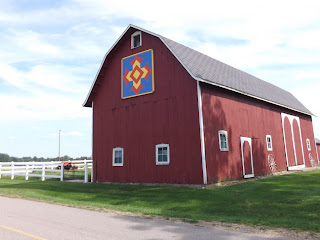 In Vicksburg, our 78-pound pup, Gracie, met her nemesis.  Yes, she who will stare down a pit bull without hesitation was petrified of Murphy the cat! 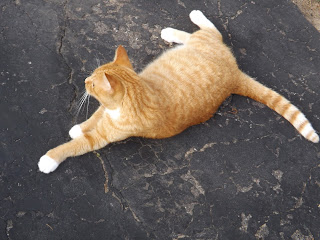 We hated to leave Vicksburg and our new friends behind, but I was due in Manchester, MI the next day.  This is an interesting take on the barn quilt--the first time I have seen a quilt created of shingles. 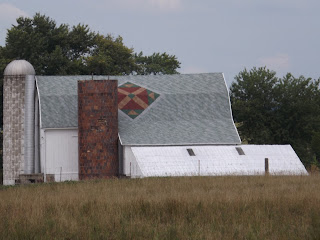 Here we are in Canada, ready to see the wonderful trails in Southwest Ontario. We visited Erieau Beach yesterday and enjoyed fresh fish in a local spot. Glad we did, as today has been nothing but gloomy.  Hoping for good weather tomorrow--nothing worse than barn quilting in the rain! 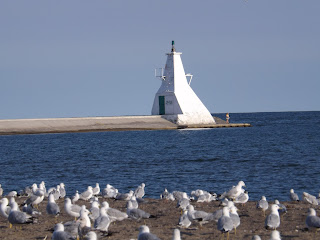 Those of you who have followed this blog for a while may know that I was a high school teacher. Well--no more!  I began to get a lot of requests to speak to quilters and other groups, so we decided to take my show on the road!  Here is our new home--we named her Ruby. 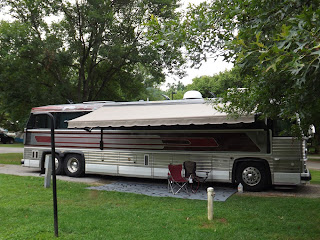 At the same time, I have been asked to write another book, tentatively titled "Farther Along the Quilt Trail."  So I am embarking on an incredible journey--both to speak about barn quilts and Donna Sue Groves' legacy and to document a bunch of new trails.

We spent the last couple of days in Kentucky, where I toured the Estill County trail.  A couple of highlights--isn't this beautiful countryside? 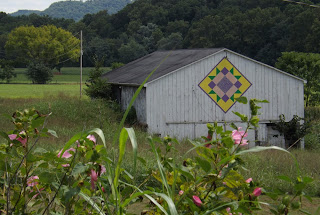 Loads of wildflowers, butterflies, and hummingbirds! 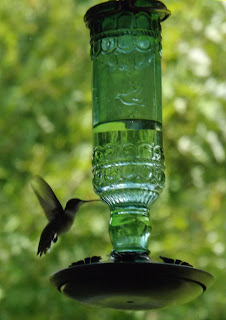 The view from our friend Sherba's back porch, where we are breakfast Saturday morning--we love it here! 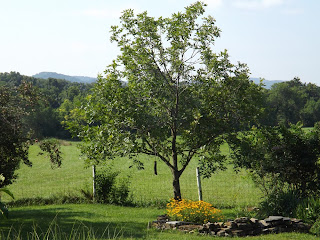 We are off to Indiana, where I will give a talk this evening.  Hope to go to the state fair tomorrow--then off to Michigan and more barn quilts!
Posted by Suzi Parron at 9:18 AM 8 comments: