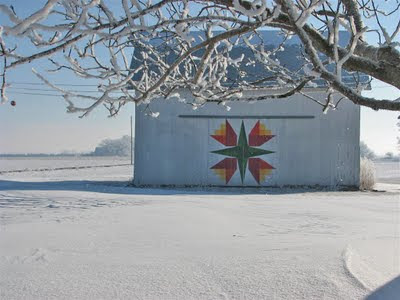 First, I have to apologize for my absence. The book is in production, and it's out of my hands for a while. For the first time since July of 2008, I took a brief respite from this project. Soon, I will back in the thick of things--finalizing the manuscript and helping to promote the book.

Thanks to those who sent notes inquiring as to my health and whereabouts; I was touched that some of you took the time to do so.
So--Spring is barn quilting season--most of the existing committees are gearing up, and some new ones are putting their plans together as well. But I just got this photo last week, and--well--you know I am a sucker for a snow photo! So--the last one of the season.
Funny thing is, I don't know a darned thing about this one. It was sent to me by Bonita Simshauser, who said that she and a friend painted it one weekend a couple of years back. It's a twelve by twelve foot square, and though Bonita didn't say so, it appears to be painted directly on the barn door. If so, that was quite an undertaking!

UPDATE:
I heard back from Bonita, who lives in Winimac, Indiana, with a bit more about her barn quilt. Her friend Ginny Smith, who lives in Gibralter, MI had seen barn quilts but didn't have a barn. Ginny and her husband came to visit for a week, and while the men were re-roofing the henhouse, the women painted the quilt. Bonita admits that the guys did help to make it square!

The project took only two days. The men were hard at work, and the women were a bit sad that their fun had come to an end so quickly. So they painted the double star on the garage--what a beauty! 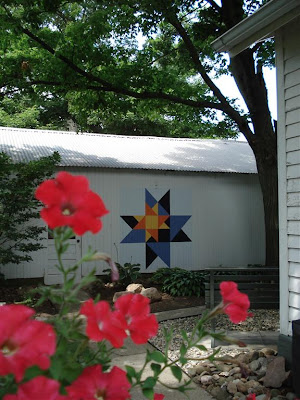 The women were still having fun, so they purchased (3) 4ft. x 4ft. plywood, primed it, and went back to work. Ginny was able to go home with quilt blocks for the back of her garage. Bonita writes, "I was so happy that she too has something beautiful to enjoy after all OUR fun work!" 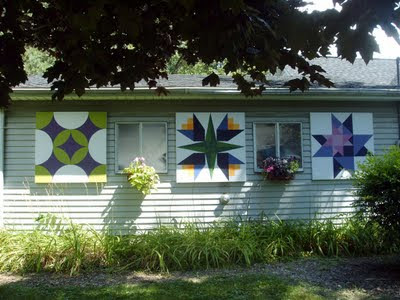 Barn quilting is fun, and I miss sharing in it! I look forward to a bit of traveling over the next couple of months, to visit old friends, to see some new barn quilts, and to take photos for next year's calendar. So there will be some new tales from the trail to share soon.