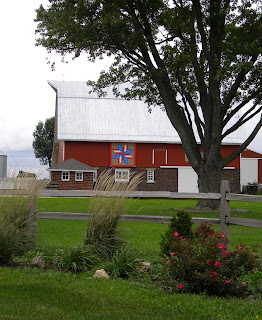 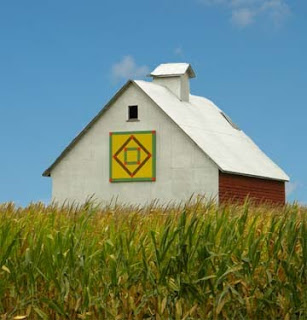 I couldn't think of a more creative title for this post; I think my brain is overloaded again--what a day. And evening! I finally got to meet Clayton and Carolyn Pratt, who are responsible for my coming to see the Kankakee barn quilts. Under cover of umbrellas in morning drizzle, we stopped and saw a couple of barns on the way to see the Solecki farm, where I met the homeschool group and their art teacher, Pat Alcorn.

These kids have created two really extraordinary quilts--the Golden Wedding Ring behind them in the photo below and the Lone Star at Pilot Grove Farm. Both employ the trompe l'oeil style--to create a three-dimensional effect. Yes, these are really paintings on flat sheets of wood! 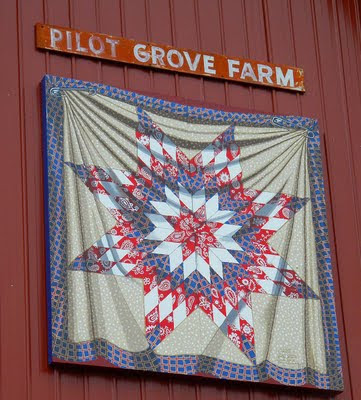 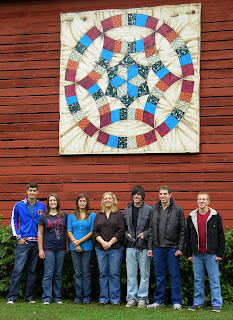 After a fun visit and photoshoot, it was time for lunch at the much-acclaimed Blue's Cafe--yes, there was pie! Holly Froning--the Energizer Bunny of the committee--joined us from there, and the tour continued.
Though I have seen hundreds of barns, there is always something new. Today it was the Diefenbach barn, whose front wall was removed and dragged forward so that an addition could be built in between. Clayton Pratt took photos of me and Carolyn and Holly with Mr, Diefenbach, who then proudly handed Clayton a camera so that he could have photos of his own. As Clayton pressed the shutter, I heard the strangest sound--film. Mr. Diefenbach was very proud of his 1980s camera that had traveled the world!
We stopped at about eight more barns, including the North Star pictured below. I didn't get to meet the owners, but I am going to go out on a limb and say that they have a sense of humor. 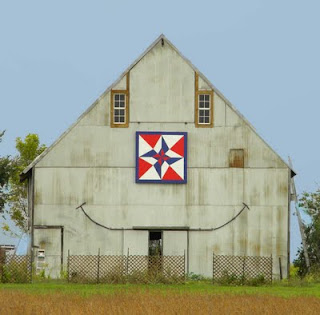 The main event was a gathering of the barn owners and committee members at the Rosenboom farm for a potluck. I promise, it's not all about food. Food will not even be mentioned in the book. But yeah, there was some good eatin' tonight.
The barn has been converted into an entertainment facility, with a banquet area upstairs and all kinds of nifty farm gadgets on display.

Mr. Rosenboom had loads of fun showing me various odd-looking items and asking, "What do you think this was used for?" There was a hog oiler, a corn drier, and a kerosene lamp cleaner that looked an awful lot like a folding whisk. Each time I was stumped, Mr. Rosenboom found something new for the City Girl to ponder. About the time he explained to me that what looked like a giant pair of pliers really was called an emasculator, it was time to eat.

About thirty people had gathered, which meant that there was enough food for a hundred. I heard great stories of collaboration between agencies and individuals, but mostly I heard the enthusiam that feeds this project in every place I have visited. One farmer was nothing short of giddy as he described how much he enjoyed his quilt. Even the woman who woke up in the middle of the night to find that a drunk driver had plowed into her barn was in high spirits. Of course, the barn quilt was unscathed.
It's two AM, and I haven't even talked about night time photography or restored tractors. It was great to be me today, but now I have to rest.
Posted by Suzi Parron at 1:42 AM