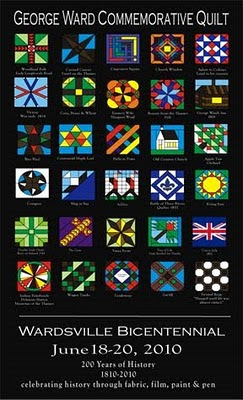 Part of the reason we decided on "American Quilt Trail" is that a sprinkling of barn quilts is located in British Columbia. That and the fact that "National Quilt Trail" sounds like some kind of government agency!

Now there will finally be an actual trail in Canada, and I'll bet it will be the first of many.

I've been corresponding with Denise Corneil of Wardsville, Ontario, for a while, and they are ready to unveil the plans to create a trail commemorating the bicentennial of the town, which was founded by George Ward in 1810.

Each of these blocks is indicative of some aspect of Mr. Ward's life--Irish Chain for his nationality, Soldier and Union Jack to represent his affiliation with the British Army, others for his religious beliefs and abundant gardens and orchards. I believe this will be the first "biographical" quilt trail.

Stay tuned for updates on this one. And if you have an update or a barn quilt that you would like for me to post, send it to me via email, and I will happily oblige.