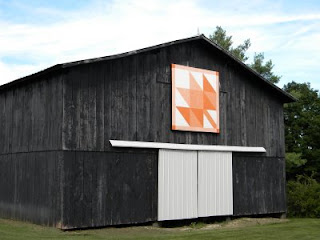 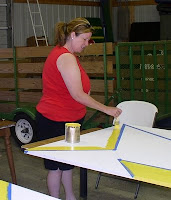 Traveling the quilt trails is always a pleasure. But generally, I travel in the company of women. Just as most avid quilters are women, most avid barn quilters are female.

But Tuesday, Gracie (see--another female) and I spent a great couple of hours with Don Hart. It was nice to spend time with someone whose voice is deeper than mine!

We ran a bit late in the morning, but Don's group had saved me a triangle to paint. Yep--that's me, putting paint to a quilt square for the first time! Gracie helped, too. As she ran back and forth between the painters, her tail became coated with yellow paint! If only we had some canvas nearby . . .
Don had some great stories to share; he does a lot to promote barn quilts around the region and has the kind of enthusiasm you would expect from someone who started last week--not a couple of years ago. And there was crab rangoon for lunch! Life is good on the quilt trail.
Late afternoon, we headed down to Rockcastle County. It was a bit hard to find the log cabin where Christopher Robbins makes brooms, but it was worth it to find a nice guy to take us on the tour. They have some really unusual squares; even their take on the maple leaf (above) is a bit different. And I resisted the urge to ask him whether he heard a lot of Winnie the Pooh jokes as a kid.
Last day on the trip--Lebanon, KY, where we met with Chris Hamilton and saw one of the most interesting squares of the week--the airplane quilt. What a great story. I only got to see a couple of barns because it was raining. Mother Nature must have known I was on my way to Eastern Tennessee.

There is something about Eastern Tennessee and me. The first time I visited in Spring, it rained. A few weeks later, it was supposed to be a beautiful day. I headed for Johnson City. Rain. Same thing in May.
We were slated to visit this Thursday; I checked the weather online; the forecast--rain. So we headed home a day early, a bit disappointed but ready for some rest.

I checked the weather Thursday afternoon. Total rainfall for Eastern Tennessee--1/100th of an inch. Go figure.
Posted by Suzi Parron at 8:47 PM